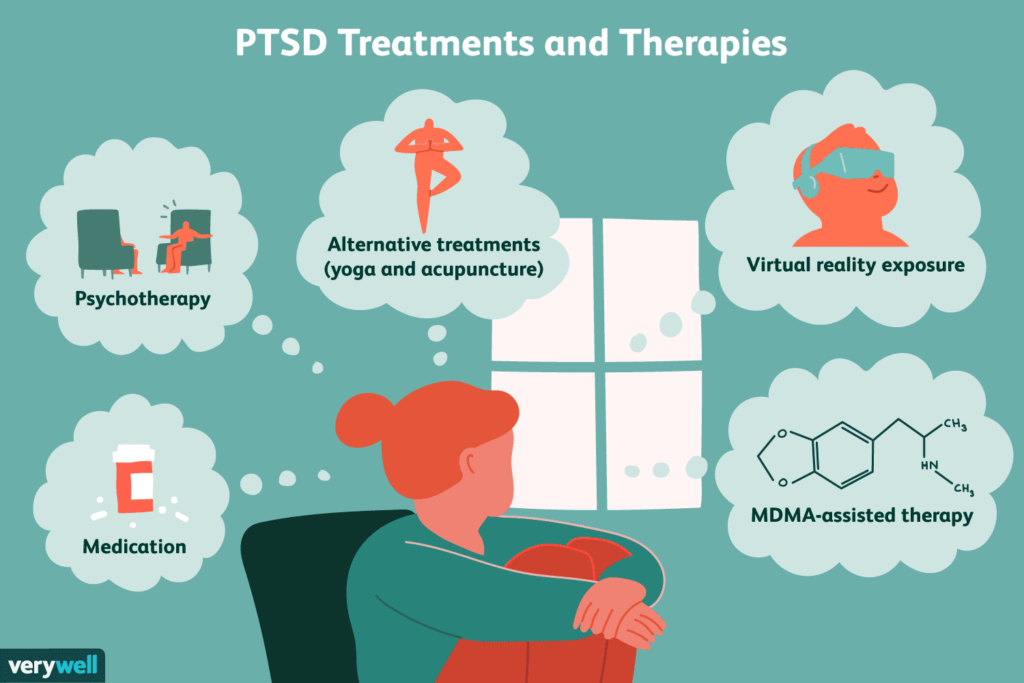 Post-traumatic stress disorder, which most people commonly refer to by its initialism, PTSD, affects about 7-8% of the United States population.

Many of us may think of PTSD as only happening to soldiers after witnessing trauma on the battlefield. But the truth is, anyone can have PTSD after experiencing a traumatic event.

It is a disorder with an array of symptoms that can afflict people of various ages, ethnicities, backgrounds, and genders (although it is twice as likely to occur in women.)

And while PTSD can pose serious mental and physical consequences on those who have it, there are treatment options. Here are three of the most effective treatments for PTSD.

Along with prescrption medications, they can provide significant relief for those with PTSD.

Trauma-focused cognitive behavioral treatment (TFCBT) is one of the most common psychotherapies for PTSD.

One of its most successful therapies is Prolonged Exposure (PE) therapy, wherein a course of treatment includes prolonged exposure to the traumatic episode.

This may sound intense, and it is. The idea is that people who have PTSD continue to suffer its consequences because they are not dealing with the traumatic event that they experienced.

PE therapy generally starts with breathing exercises. Your therapist will teach you how to do these breathing techniques and when to do them (usually anytime you feel an onset of anxiety).

Then, your therapist asks you to write a list of things you’ve avoided since your traumatic experience, such as crowds, traffic, loud noises, etc.

Finally, your therapist will record your voice as you recount the traumatic experience in as much detail as possible. You will take the recording home with you and listen to it on a schedule they create.

These types of imaginal and in vivo exposure strategies allow the PTSD patient confront the traumatic event repeatedly until their fear and other symptoms diminish completely.

Though it sounds like a mouthful, it is in actuality a pretty straightforward process.

The patient sits and focuses on their traumatic event while their therapist makes a movement, such as flashing a light or waving a hand, or they make a sound.

Ideally, during this therapy, the patient will think about something positive as they mentally relive their trauma. Over time, the negativity and fear associated with it will diminish until it is gone completely.

One of the unique aspects of EMDR is that the patient does not typically have to recount their traumatic event to their therapist. This can be a major benefit to someone with severe PTSD who cannot speak about the episode.

Medical cannabis is legal in most U.S. states because it has proven medical benefits.

And yes, one of these medical benefits is that it is an effective treatment for PTSD.

Our endocannabinoid system (note the word cannabinoid, the active compounds of the cannabis plant) is naturally made up of cannabinoids, receptors, and enzymes.

They work together to ensure our bodies are in a state of homeostasis (as in working as it should be).

In fact, our endocannabinoid system directly affects and regulates our:

When any of these are out of whack, we feel it. But our endocannabinoid system is so named thanks to its ability to work well with cannabis.

Medical cannabis strains that contain THC and CBD work harmoniously with our endocannabinoid system, helping to regulate our mental and physical health.

PTSD patients can benefit from specific cannabis strains that stimulate the cannabinoid system during their therapies, actively helping to remove the fear felt when they think about the trauma.

These are three of the most effective treatments for PTSD. We did not mention prescription medication as that will no doubt be prescribed by your doctor when they diagnose you with PTSD.

These therapies and medical cannabis use work well in conjunction with antidepressants and other prescription medicines, too.

Because PTSD is such a complex disorder that involves both physical and mental symptoms, safely engaging in numerous treatments is a smart way to face past traumas and work towards a resolution.

How To Find The Perfect Partner In Cairns

Guidelines to leave behind your past